Bicycle : are we good “cyclists” ?

In Luxembourg, the problems around mobility are well known to all. Fortunately, there are several transport options besides driving...

One of the easiest transport solutions is cycling. Bicycles are eco-friendly, allow us to travel quickly, and for distances under 6 km, they are more efficient than cars, which must contend with traffic and parking. For longer distances, combining biking with public transit is also a good alternative to driving. What is the state of bicycle use – extensively developed by our European neighbours – in the Grand Duchy? And what resources are in place to make bicycles easier to use? Which town are at the head of the pack in Europe ?

Amsterdam: the city is ranked as the no. 1 cycle-friendly city in the Netherlands and no. 2 in Europe. The capital of the Netherlands is also its cycling capital. While cycling is a cultural habit there, this mode of transport has been largely supported by local authorities. In fact, the city is responsible for most of equipment used by the 500,000 cyclists who ride the 400km of cycle lanes each day. Awareness of the benefits of cycling is so high that today, 60% of trips within the city are made via bicycle. Amsterdam is among the cities that devote the largest budget to their cycling policy, around 20 million euros per year. This budget serves to fund road infrastructures, including many parking areas near schools and other essential community spaces, to encourage residents to use their bicycles (in the central train station area alone, 18,000 cycles are parked every day). A victim of its own success, the city is not immune to bicycle traffic jams, but efforts are being made to perfectly coordinate the network of cycle lanes.

Copenhagen is constantly investing in “soft” modes of transport, and particularly in cycling. Since 1990, the number of cyclists in the city has increased by 70%, while the number of car trips to the city centre has fallen from 350,000 to 260,000 per day (in Copenhagen, 1 out of 3 residents bikes to work). The fact that the city is practically flat makes cycling easy, as do its numerous cycle lanes. Since the end of the 2000s, 15 to 20 million euros per year were invested in infrastructures dedicated to cyclists, who have long been considered in urban planning. The cycle bridge is now the preferred infrastructure of urban planners in Copenhagen. Four are under construction, and another four have already been built. The most notable among them is the “Cykelslangen” or “bicycle snake”, a cycle bridge that meanders its way over the harbour.

A note on security: to prevent theft, all bicycles are registered.

Strasbourg, the solutions to develop cycling

Among our French neighbours, Strasbourg is the leading city in the field with 310,000 bicycles for 270,000 residents. Strasbourg has not always been a city with a strong cycling culture, but by taking inspiration from the “German model”, the green policy adopted by the city has made it the no. 1 cycling city in France and no. 4 in Europe. The cycling contingent has tripled in 15 years and, last year, 2 million cyclists passed in front of the Rivetoile shopping centre located near the city centre. More than 50% of Strasbourg residents ride bicycles, and that’s a record in France!

Several measures have allowed the city to achieve this.

First, Strasbourg has one of the most effective self-service bicycle systems in Europe. Its simple, useful and efficient operating method encourages both residents and tourists to use this solution. In addition, the city’s network of cycle lanes is perfectly coordinated. The coexistence of cyclists and motorists and the development of car-free zones allow the municipality to guarantee an average speed of 20km/h so that all points in greater Strasbourg are a maximum of 30 minutes from the city centre. Reducing the use of cars was a win-win solution, as it has helped improve the city’s air quality while encouraging citizens to practice light physical activity.

The city hopes to develop new cycling options, such as the use of electric bicycles and freight bicycles, in the near future.

And the situation in Luxembourg?

Despite its obstacles, Luxembourg is not far behind, and can even hope to race to the head of the pack.

Today, nearly a million bicycles are counted at the various checkpoints located on the streets of the capital; this figure is double what it was five years ago. These figures show us that bicycles do play an important role in the daily lives of Luxembourg residents. This is the result of the policy in favour of “soft” mobility that has been adopted by local authorities. The development of road infrastructures is another positive: nearly 600 km of cycle lanes have opened in Luxembourg, and this number should increase to 900 km in the next five years. The biggest development is the Vel ‘oh self-service bicycle system, whose success is demonstrated by an ever-increasing number of subscribers, the opening of new stations and, above all, the delivery of 800 electric bicycles by the end of the year. Luxembourg is the second city in Europe, after Stockholm, to introduce such a system.

Cyclists in Luxembourg: some figures

According to a survey conducted by the Ministry of Sustainable Development and “soft” mobility infrastructures (pedestrian, cycle) in Luxembourg, 60% of residents used bicycles last year and wish to use them more frequently. There are 465.029 bicycles in 87% of 208.565 private households, including 323.393 that were used in the last 12 months. This is comparable to the number of private cars registered with the SNCT – Société nationale de circulation automobile (National Society for Automobile Traffic).

Moreover, pedestrians and cyclists will be prioritised by the most recent changes to the highway code, which took effect on 1 May 2018 : to review the nine measures taken in favour of cyclists, click here !

In short, the pleasures of cycling will now be accessible to all, with a higher level of safety.

Bicycles are still one of the most efficient forms of transport for short or medium urban commutes, for instance:

DISCOVER OUR OTHER ARTICLES ON THE SAME TOPIC 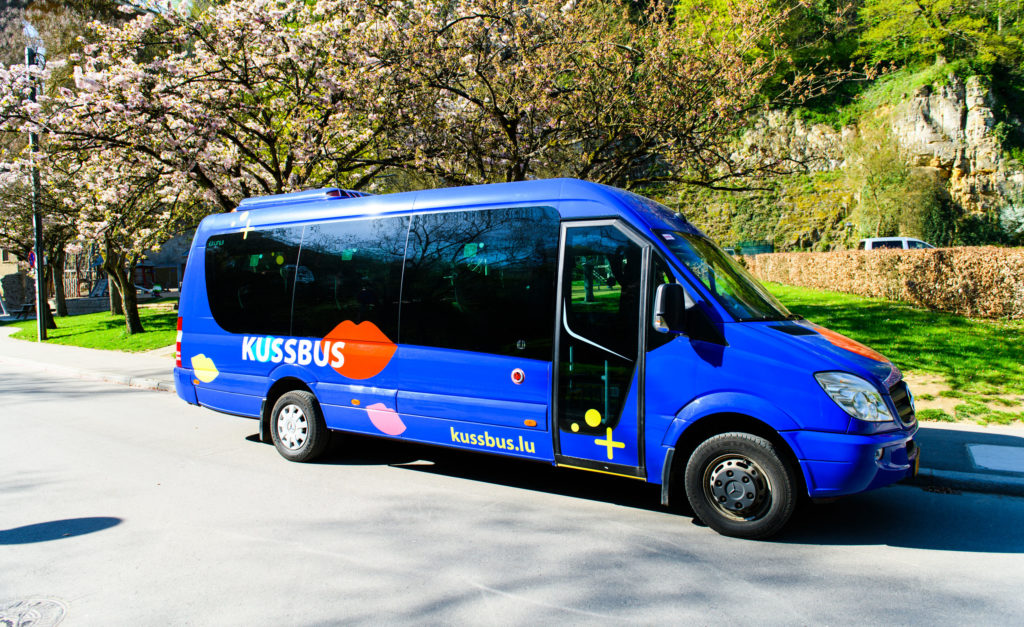 Intrigued by this new mobility solution offered by Kussbus, we met the founders of the company. Read on to find out what we learned during this exclusive interview!

Read more
Previous article In the same section Next article

Your web browser may be out of date

Update your browser to enable this website to function properly. To upgrade my browser

You can find out more about which cookies we are using or switch them off in settings.

This website uses cookies so that we can provide you with the best user experience possible. Cookie information is stored in your browser and performs functions such as recognising you when you return to our website and helping our team to understand which sections of the website you find most interesting and useful.

You can adjust all of your cookie settings by navigating the tabs on the left hand side.

Strictly Necessary Cookie should be enabled at all times so that we can save your preferences for cookie settings.

If you disable this cookie, we will not be able to save your preferences. This means that every time you visit this website you will need to enable or disable cookies again.

This website uses Google Analytics to collect anonymous information such as the number of visitors to the site, and the most popular pages.

Please enable Strictly Necessary Cookies first so that we can save your preferences!